The DreamWalker Death Transition Guide helps to go beyond the fear of death. 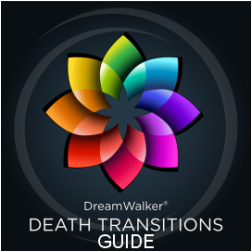 Fear of death is the greatest fear that human have. People have forgotten what is the real meaning of death. People have forgotten the kind of spiritual orgasm that they can experience during 'death': releasing the human and the earth limitations, releasing the body, the abandonment of the physical and human concerns, the journey into dimensions. All this leads to a new kind of reunion with real own Self.

Death. Death is a human term that nobody likes to hear, and nobody likes to talk about it because it brings up many basic issues and it actives fear, controversy and religious issues.

Human death is inevitable, at least in the current human consciousness, but it is possible to overcome the old way to die, you can pass through in an entirely new way. In human consciousness and in the present time, death is very old energy and it has many fears.

A DreamWalker Death Transition Guide can help to change a bit of that old energy, a bit of old beliefs and understandings about death.

Generally, when people are about to die, they are lying in a hospital bed, and they know that their days are numbered. The whole energetic dynamic of this process can be changed if there is another person who holds their hand and breathes with them. The DreamWalker Death Transition Guide knows how it feels to be alone, completely alone: there is a lot more fears when they are alone. Deamwalker Guide provides services related to death, The presence of a Dreamwalker Death Transition Guide brings a great comfort to who are going to pass through.

People feel a sense of relief. They feeland they know that they are not alone. This feeling can help to go beyond their fears and, also, to overcome a bit of physical pain. In fact, most of the physical pain is associated with death as fear to leave. This fear causes a physical pain in the body. If the fear of death diminishes, also physical pain diminishes and beneficiary can pass through.

At this time on Earth, it is really important to teach this new understanding and to practice this new way of dying.
In terms of general awareness, it is very important.

Death is a beautiful thing but, in the current human culture, death has a very bad reputation and it is full of negative energy.
Death is beautiful because it allows the completion of a cycle of a story. The death leads to a natural state of being.

On Earth, the death must not be necessarily how it is now. In the final moment of life on Earth, when the transition takes place in death - or the passage on the other side - person can try an explosion of wonderful joy. The word death is a misnomer, because in the other side the soul, the Essence, the lightbody is  more alive than on Earth. Person, with own soul, can become more aware, feel more and be more expanded.
In a way, death is a homecoming, not as a physical place, but as a state of consciousness that it is more familiar. Today, modern society and, especially, religion teach that death is something to be ashamed.

Death is a wonderful thing. It is possible to change the understanding and perspective of death and of the cycle how to have and after leave an physical being. Perhaps, a new potential of death can add to the current awareness. It's possible to  disappear fears and all blocks.

(from Dreamwalker Death Transition Workshop)
The Dreamwalking was practiced for centuries in various forms by many indigenous peoples. However, because of modern culture, this beautiful spiritual art is lost. It is emerging at this time, when many people are experiencing a deeper desire for spiritual connections, with the arrival of the New Energy and the New Consciousness.

The Dreamwalking, at this time, creates excellent opportunities for individuals to make choices, how they would like the experience after death. Choosing to have beside a Dreamwalker Death Transition Guide, people have the option to choose with whom they would want to walk after leaving own body.

The "funeral" in the New Energy

The funeral service. Usually, this event marks a transition point. Normally it is a very sad event. Maybe it's time that the whole concept of the funeral changes. It tends to be very morbid, dark and depressing, devoid of any joy. It tends to be full of old religious rituals so that the suffering continues, especially in Christian society.
It 's very sad.